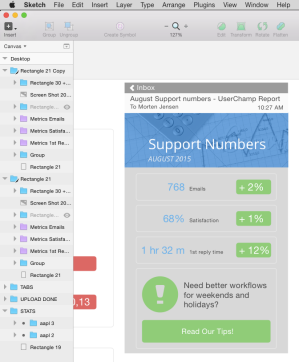 My design experience is mostly from working on product strategy and UX design as opposed to final pixel UI and visual design. So mostly looking at what a thing can do and how. Not so much exactly what it looks like. Whenever working on design my work usually stops at wireframes or sometimes mock-ups made from existing page elements. From there it is mostly a case of iterating through design in the code with the developers.

But I have been spending time doing some “last mile” design lately. My goal is not to be a UI designer, I don’t have the patience for that anyway. As with most other things I would just like to suck less at it.

My reasons for getting better:

My process for idea to prototype:

I’m still experimenting with those last few steps to make sure it all adds value and doesn’t end up with me staring at some pixels all day claiming that “I’m designing”. Like everything else, I need to design to get better at designing. And that requires accepting what sometimes feels like a staggering level of incompetence to get to those time where I can see that things suck a little less than they used to.